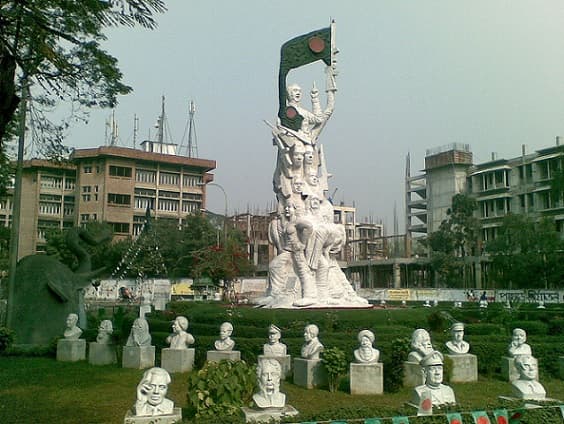 The Swadhinata Sangram sculpture is the largest sculpture in Bangladesh containing the history of the glorious struggle of the Bangalis and Bangladesh. Shamim Sikder, a famous women sculptor in Bangladesh, created this sculpture. The sculpture is located at road island of Fuller Road in the campus of University of Dhaka.

The Swadhinata Sangram was previously known as Amar Ekushey Sculpture (অমর একুশে ভাস্কর্য). In 1978, Shamim Sikder started sculpting in front of an abandoned bungalow on Fuller Road, Dhaka University; at that time its name was Amar Ekushey. It was inaugurated in 1990 by Ahmed Sharif, a professor of Dhaka University.

Reforming and renaming of the sculpture

In 1997, the sculpture was moved to a nearby road island because construction of a building of Udayan High School began on the site. Later, Shamim Sikder changed the form and expanded the sculpture in the light of the history of the liberation war of Bangladesh and renamed its existing name Amar Ekushey to Swadhinata Sangram (Freedom Struggle). At the same time, she decorated the road island with various small sculptures in the new form. The reformed and renamed sculpture the Swadhinata Sangram was inaugurated by the then Prime Minister Sheikh Hasina on the historic day of Bangabandhu’s speech declaring the freedom struggle of Bangladesh March 7, 1999.

Historical importance of Swadhinata Sangram and its architectural description

In this sculpture Shamim Sikder presents the great language movement of 1952, the six-point movement of 1966, the mass uprising of 1969, the call of Bangabandhu’s freedom struggle on March 7, 1971, the night of March 25, the declaration of independence on March 26 and the victory of December 16. The whole sculpture is made with the faces of 16 martyrs who were killed in each movement. Below all is the language of martyrs and above all is the sculpture of Bangabandhu. At the top of this sculpture is the national flag of Bangladesh.

In addition, the triangular road has been decorated with busts of all the best people from home and abroad across the island. These sculptures include Rabindranath Tagore, Kazi Nazrul Islam, Lalon Fakir, Jagadish Chandra Bose, Bankim Chandra Chattopadhyay, Ishwar Chandra Vidyasagar, Michael Madhusudhan Dutta, Sukant Bhattacharya, artist SM Sultan, Subhash Bose, Mahatma Gandhi, portraits of Yasir Arafat, Sher-e-Bangla AK Fazlul Haque, Maulana Bhasani, Colonel M. A. G. Osmani, Tajuddin Ahmed, Siraj Sikadar and others. There are also three more portraits in the three corners of the sculpture. One of them was Shaheed Nur Hossain in the mass uprising of the nineties.

There are a total of 118 sculptures in the freedom struggle sculpture, including an impressive sculpture of an elephant and two portraits of sculptor Shamim Sikder.

The height of this white sculpture is 60 feet. And the perimeter is 65.75 feet. The small sculptures around the Freedom Struggle, presented in the middle of a circular fountain, are 3-4 feet high. The nameplate below the original sculpture.

Shangshaptak or the Loyal Soldier at Jahangirnagar University