Some Historical Places of West Bengal, India You Can Visit 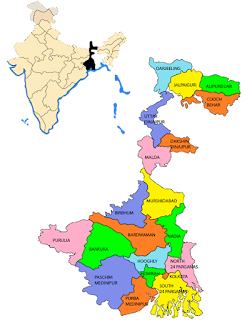 Teeming with a rich historical past, the State of West Bengal is an ideal destination for Artists, Archaeologists and history fanatics. Abound with majestic forts and magnificent temples; much of the nation owes its bounty to the State of Bengal. Ruled by the British for the larger part of its history, Bengal is filled with tales of romance, brutality, battles and bravery. Having its very own unique charm, Bengal is embraced by the mighty arms of the Himalayas in the North and caressed by the sea in the South. For travellers and tourists alike who crave to experience different languages, religions, customs and traditions, Bengal is bound to be an enthralling journey.

Having witnessed history from its core, the town of Murshidabad, serves as a place that manages to combine the beauty of the past with the beliefs of the present. This awe inspiring place is both a religious town and a monument city with unlimited beauty and magnificence. Home to some of the most exquisite architecture in the State of West Bengal, Murshidabad is often used as a weekend getaway. With a chromatic and bustling bazaar that is rich in handicrafts and silk sarees, the town also offers a large number of hotels at cheap rates.

Set in a cosy cluster in the Gangetic plains, Birbhum is noted for its rich cultural heritage and its industrial significance. Some of the attractions in Birbhum are Santiniketan, Sriniketan and the Ballabhpur Wildlife Sanctuary. With its unique topography, the region has red soil due to the presence of fertile alluvial soil. It is the key centre of cottage industries in West Bengal. Birbhum also serves as the home to the famous and historically significant university, Visva Bharati which was established by the world renowned poet Rabindranath Tagore. Festivals like Durga Puja and Charak Puja are celebrated with great zeal in the district. Birbhum also provides deluxe hotel accommodation and various medium budget accommodations as well.

Famous mainly due to its temples, hills and historical significance, Bankura is also a treat for sports enthusiasts like trekkers and hikers. Distinguished for its terracotta temples which attract tourists from all over the world, Bankura is a commonly used getaway for people from Bengal. Siddeswara temple, Biharinath Hill, Koko Hill, Susunia Hill, and many more constitute to the list of places one can visit. The area’s history intermingles with spirituality to create a simple yet unique experience. Famous for its local sweets and local drinks, Bankura has a modest variety of eateries.

Situated in the interiors of West Bengal, Malda has history at every street and every turn. Adorned with monuments from the time of the pre-colonial Nawabs to the East India Company, Malda is a visual delight. Formerly known as the English Bazaar, this town has experienced the reign of three different dynasties and is hence rich in culture and heritage. Scattered with numerous monuments, Malda is one of the most historically relevant cities in Bengal. In addition to its various Bengali delicacies, Malda is famed for its cultivation of mangoes. Malda also houses many hotels for the voracious traveller.

Situated on the banks of the river and having got its name from the river itself, Hooghly is a major commercial centre and holds the largest port in Bengal. Initially the site of the first European settlers in Bengal, Hooghly was reached by the legendary Vasco Da Gama. European powers such as the Dutch, the Danish, and the French have also been here, making it an area colossal in heritage and culture by leaving their mark in the vast district. With the large town of Chandannagar as its epicentre, Hooghly is one of the most economically developed districts in Bengal. Sights such as the Tarakeswar Temple and the Hooghly Imambara make it one of the most visited districts in Bengal.

One of the largest and most picturesque districts in the state of West Bengal, Barddhaman has a history that dates back thousands of years. Having being ruled by various dynasties and countries alike, Barddhaman is bound to have a rich heritage. The temples and shrines erected by the Asian rulers matched with the gates built by the Europeans, the district is teeming with historical architecture. Some of the illustrious tourist destinations include the Deer Park, the Kankaleswari temple, the Curzon Gate, the Sikh Gurudhwara, the Science centre and many more. The city is also famous for its abundance rice production.

Hidden in the interiors of West Bengal, another treasure can be found which combines the beauty of Bengal’s culture with the exuberance of History. West Midnapore or Medinipur as it is called by locals, is one of the few towns which have so many places to offer. During ancient times, Jainism and Buddhism were the dominant religions with a distinct culture that can be found in these parts. The St. Johns Church along with the other Hindu Temples and the vibrant bazaar give the tourist quite a lot of attractions to see. Festivals are celebrated with full fervour in these parts and an avid traveller is bound to get a treat into the flavour of the different customs and traditions. Finding lodging is an easy task whether it be high end accommodation or small scale budgeted lodging.

Cooch Behar is a reminder of the glorious past of Eastern India. Located across the indo-Bangladesh border, Cooch Behar is adorned with palaces and temples inspired from religious and international architecture. The Cooch Behar Rajbari and the Madan Mohan Temple are monumental in size and scale and exude a unique grandeur. The cultures and traditions of a bygone era are still omnipresent in the lifestyle of the locals who take immense pride in their history and culture. Apart from the historical significance, Cooch Behar is home to an amazing variety of flora and fauna and boasts some of the best and largest wildlife sanctuaries and parks.

Information is not modified.

What is the MIR System and Why will Iran and Russia trade in the 'MIR' system, avoiding the Swift system?
Read more
International