SA vs BAN: A historic series win for Bangladesh in South Africa 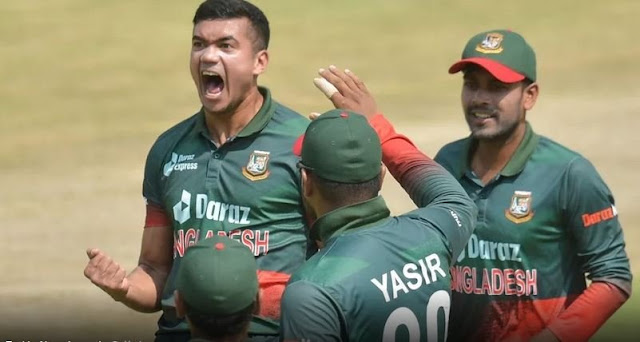 An indomitable Bangladesh came all guns blazing to crush South Africa by 9 wickets in the third and final match and in doing so claimed the three-match series by 2-1 at SuperSport Park in Centurion today.

This was unarguably the biggest event in the country’s cricket history since the series victory came at overseas soil against a nation, which always was invincible at home regardless of their strength.

Bangladesh had already created history by winning the first ODI by 38 runs, which was their first victory on South African soil, snapping a 19-match winless streak. South Africa hit back with a seven-wicket victory in the second game but the Tigers didn’t give up the hopes of winning the series.

Bangladesh have been also invincible like South Africa at home since 2015 but a series victory at overseas looked always out of touch.

Even though they won series in West Indies and Zimbabwe, it exactly couldn’t hog the limelight given the current scenario of those two cricketing nations. They also won a tri-nation series in Ireland ahead of 2019 World Cup, involving Ireland and West Indies.

But knowing that conquering South Africa will quell the other cricketing nation’s doubt on their ability to win a big series overseas, the Tigers were extremely determined ahead of the series.

Fast bowler Taskin Ahmed translated Bangladesh’s determination in his bowling, claiming 5-35, which was instrumental in wrapping up South Africa for just 154 in 37 overs. Thereafter a series victory looked like a matter of time.

Skipper Tamim Iqbal, who was out of sort in the first two matches, unleashed his natural game to clobber an unbeaten 82 ball-87 with 14 fours as Bangladesh raced to the victory with 141 balls remaining.

Liton Das struck 48 and Shakib Al Hasan who brought up the greatest victory of the country with a boundary off Kagiso Rabada remained not out on 20.

South Africa made a good start indeed after electing to bat first with Janneman Malan showing the way.

But the wicket of de Kock who hastened South Africa’s victory with 41 ball-62 in the second ODI, motivated Bangladesh to an uncanny degree.

Taskin Ahmed then came up with a sensational bowling, scything down South African top order in no time. He began with Kyle Verreynne  (9), undoing him with an extra bounce and then dismissed Malan with a short delivery.

Before being dismissed, Malan top-scored for the side with 39.

Left-arm spinner Shakib Al Hasan then got into act with the wicket of skipper Temba Bavuma who made just 2. Fast bowler Shoriful Islam, who had a disastrous first spell, courtesy to Malan, came back with bang to take the wicket of inform Rassie van der Dussen as South Africa were five down before crossing 100.

David Miller and Dwaine Pretorius were strangled but somehow managed to stay in the crease to help the side go past 100.

Taskin then back again and removed both of them. Miller scored 16 and Pretorius made 20.

Taskin completed his second five-for, getting rid of Kagiso Rabada for 4. But the unexpected resistance came from Keshav Maharaj, who calmly took South Africa past 150.

He struck 28 before being trapped run out as last batter. Meantime Shakib took the wicket of lungi Ngidi who accompanied Maharaj for crucial 18-run for the ninth wicket even though he couldn’t score, facing 14 balls.

Sensing a historical series victory, Bangladesh openers Tamim Iqbal and Liton Das began with unwavering resolve. They were highly alert of not losing early wickets and gradually blunted the new ball to help the Tigers inch closer to victory.

With caution and calculated aggression, they kept Bangladesh aloft. Keshav Maharaj broke through with the wicket Liton but by then they put up 127-run, their highest opening partnership against South Africa. Liton made 48.

Tamim and Shakib then sailed the side home as the whole team celebrated the greatest victory of the country’s history wildly.

The Lusail Iconic Stadium Will Host the 2022 FIFA World Cup Final Game; Do You Know about the Stadium?

Tamim Iqbal Khan, the only centurion in T20Is, wants to be back on the T20I team; will the Bangladesh Cricket Board allow him a...
Read more
Sports

Why does Zinedine Zidane appear just like any other Real Madrid fan in his home stadium?

It is now big news in the cricket arena that Shakib Al Hasan has been again appointed captain for Bangladesh cricket team for 2022...
Read more
Sports

It is now big news in the cricket arena that Shakib Al Hasan has been again appointed captain for Bangladesh cricket team for 2022...
Read more
Sports