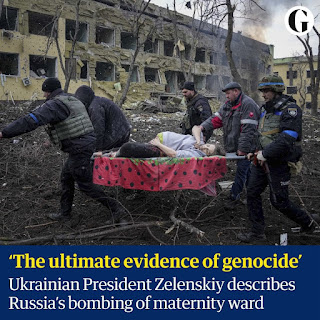 This image shows an injured pregnant woman being carried by Ukrainian emergency services from a maternity hospital that was damaged by Russian shelling in Mariupol.Ukraine’s president Volodymyr Zelenskiy decried the bombing which took place yesterday. He said: “Hospitals and schools are destroyed. Churches and ordinary buildings are destroyed. People are killed. Children are killed. Air bombing on a children’s hospital is the ultimate evidence that genocide of Ukrainians is happening.”The United Nations Population Fund condemned the strike. Footage of the attack shared online by Zelenskiy shows the hospital’s windows being blown out, and parts of it collapsing.Ukraine’s foreign minister, Dmitryo Kuleba, accused Russia of “holding 400,000 people hostage” in Mariupol, much of whose population has been without power, heat, water or phone signal for over a week.Amid western warnings that Moscow’s invasion was about to become even more brutal as the Russian leader, Vladimir Putin, seeks to regain stalled momentum, local authorities described the damage to the hospital – a combined 600-bed complex with children’s and maternity wards – as “colossal” and said at least 17 people had been wounded, including women in labour.The deputy mayor, Sergei Orlov, said the city was being shelled continuously and 1,170 residents had died, 47 of whom were buried in a mass grave on Wednesday. “It’s medieval,” he said. “It’s pure genocide. The attack isn’t simply treacherous. It’s a war crime.”The Guardian was unable to fully verify the Ukrainian officials’ accounts, but video published by the Associated Press showed multiple injured people at the site of the hospital attack.Zelenskiy said on Wednesday the threat level against the country was “at the maximum” and again called on the west to impose a no-fly zone, saying it risked a “humanitarian catastrophe” if it did not.He called the Russians “Nazis” in an interview with Sky News, saying: “If you are united against the Nazis and this terror, you have to close. Don’t wait for me ask you several times, a million times. Close the sky.” He warned that otherwise “millions” could die.

What is the MIR System and Why will Iran and Russia trade in the 'MIR' system, avoiding the Swift system?
Read more
Money