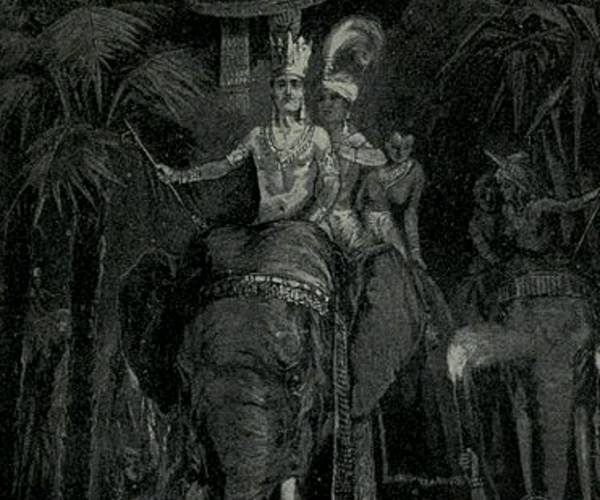 Ajatashatru was the son of King Bimbisara of the Haryanka dynasty and the Kosala princess Chelena. In 492 BC, at the instigation of Devadatta, a Buddhist monk jealous of Gautama Buddha, Ajatashatru tried to assassinate the Buddha and the patron saint of Buddhism, Bimbisara. Believing in the Buddha’s ideology, Bhimsa forgave his son for this incident.

But again at the instigation of Devadatta, Ajatasatru besieged Bhimsa and his advisers and declared himself the ruler of Magadha. Bimbisara died under house arrest in 491 BC.

It is said that Ajatashatru sent his father Bimbisara to prison. Later, he cut off his father’s hands and feet, rubbed salt and acid on him and tortured him. He was then burnt to death in a coal fire. His mother Koshala Devi died in this show.

At this time, at the instigation of Devadatta, Ajatashatru tried to kill Gautam Buddha. After the death of his father, Ajatashatru, burning with remorse, took refuge in various religious advisers and philosophers in the hope of finding peace. But after failing to find peace in their advice, the king sought refuge in Gautama Buddha on the advice of Jeevaka, the king’s physician, and the Buddha interpreted him as samannaphala sutta.

In history, Ajatashatru is known as the killer of own father.

Angered by the captivity and death of Bimbisara, Koshal Raj Prosenjit once again took control of the Kashi kingdom which had been given to him as a gift and declared war on the Koshal kingdom. He won the first battle but lost the next. But Prosenjit, a believer in Gautama Buddha’s ideology, freed him and gave his daughter Bajira in marriage to him and returned to Kashi kingdom as dowry.

Several times before the Ajatashatru, the Lichchhabis took full vow and swore to take revenge on the Ajatashatru when they left for their own country. According to the Mahaparinibbansutta of Digha Nikaya, he sent his minister Basskar to Gautama Buddha to find a way to defeat the Licchavis.

Gautam Buddha advocated that as long as the Licchavis discuss the political situation in a united manner, follow the advice of the laws and elders of their country, do not engage in any violent crime against women, and respect places of worship and authority, no foreign power can control them. Can’t do any harm. As a result of this advice, Ajatashatru then succeeded in trying to create division among the Licchavis instead of the military power and the army of Magadha was able to take possession of Briji Mahajanapada.

It is known from the book ‘Abadan-Shatak’ that in his early life he was a staunch opponent of Buddhism. His father Bhimsa was a devotee of Gautama Buddha. He built a mound on the Buddha’s toenails and hair in his inner city. Ajatashatru stopped worshiping at this stupa after the death of Bhimsa. A maid was killed when she went to worship secretly. He then forbade the people to go to Gautam Buddha. But in the end, he suffered terribly for killing his father. He met the Buddha to escape this remorse. In the elongated part of the Sutrapitaka of the Tripitaka, it is seen in the ‘Samvain Fal Sutra’, he had a long talk with Gautama Buddha. He finally confessed to the Buddha about his father’s murder and prayed for his remedy.

Within a few days after Gautama Buddha’s enlightenment, ideological differences became apparent. Apart from that, many of the deserving disciples of the Buddha also died during this period. The fear of the Buddha’s words and their interpretations being lost or distorted intensified. To solve this problem, Mahakashyap organized a Buddhist meeting in 483 BC with the help of Ajatashatru, the king of Magadha. It is said that he attended this meeting in a cave called Saptaparni of the palace. According to the decision of this meeting, one of the disciples of Buddha was gathered under the leadership of Ananda and the other disciples of Buddha were led by Upali and Binayansha. Later these two collections were divided according to subject, and Binoypitak and Sutrapitak were made. Later a part of Sutta Pitaka was separated and a third Pitaka called Abhidhamma Pitaka was made. Tripitaka is the compilation of these three Pitakas.

At the same time he believed in Jainism. He has met Jainguru Mahabir many times with his family.

Story of Queen Soma and Kaundinya I of Funan

Story of Queen Soma and Kaundinya I is one of the best love stories in the world. Their love led them to...
Read more
History

Funan— an ancient kingdom or empire and culture of Southeast Asia

History: Biography of Chandragupta Maurya and His Maurya Empire

Kol uprising: Why did the Kol uprising take place and what were the impacts of the rebellion?

In the first half of the 19th century, especially immediately after 1820, the normal way of life and independent existence of the...
Read more
History

Harappa and Mohenjo-daro, two of the oldest civilizations in the Indian subcontinent, located in the Sindh province of Pakistan, were highly developed.
Read more
History

Buddhists have made significant contributions to religion, education, and culture in India. Many Buddhist monasteries and Mahaviharas were built in the Magadha...
Read more
Related Articles
History

People's interest in learning about Jews is not new today. But how much information have people been able to know about these...
Read more