John Rucker Tracks Turtles to Save Them, Six Dogs Help Him

John Rucker, a high-school teacher, who is popularly known as turtle tracker. He is from North Carolina. He tracks turtles to save their lives. But Mr. Rucker does not work alone; he has a team. The team has six Boykin spaniels. He and his six soldiers are on a mission to keep box turtles, North Carolina’s official state reptile, safe from threats to their natural habitat in the 1,000-acre Sherwood Forest neighborhood. 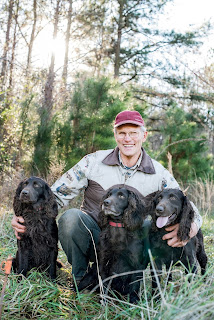 A species in decline, the slow-living box turtle is vulnerable to everything we do as humans. It is hard to find them because these turtles are camouflaged and relatively secretive. This hardness of the work makes studying turtles population and their health inherently difficult.

But Mr. Rucker has taken the challenge to save the turtles in the forest. He is now a 74-year-old man, but looks so much stronger. Mr. Rucker, with the help of his dogs, is determined to keep his “kinship” with the turtles going.

By searching on the internet I came to know that the names of his dogs are Yogi, Ruger, Jenny Wren, Lazarus, Scamp, Skeeter and Rooster. The man and his dog-squad travel across the country to track turtle populations and identify threats and diseases.

I saw this news on International media, and got some interesting information about them. If you want to know more about the man with the dog-team who tries to rescue turtles throughout the world, you must search on Google.

People should thank him and do something to save nature.

Love and respect to John Rucker from Bangladesh.

What is Blue Economy?

The term 'blue economy' refers to the exploitation, protection, and regeneration of the marine environment in terms of economics. Its breadth of...
Read more
Related Articles
Money

What is Blue Economy?

The term 'blue economy' refers to the exploitation, protection, and regeneration of the marine environment in terms of economics. Its breadth of...
Read more
Nature