History of Holika Dahan and Its Significance and Rituals

Who Was Holika? What Is Holika Dahan and Its Significance, Rituals, Background, and Time? 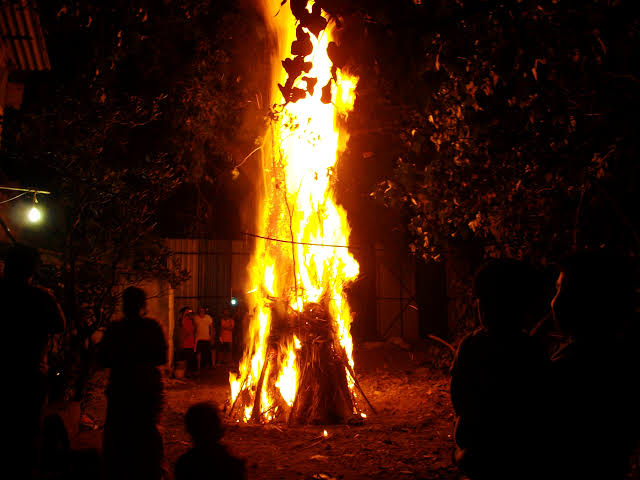 Holika was a demon and the sister of King Hiranyakashipu, as well as Prahlad’s aunt. The pyre is ignited the night before Holi, symbolizing Holika Dahan. People gather around the fire to sing and dance. The next day, people participate in Holi, a celebrated color celebration.

What is Holika Dahan and Its Significance

The celebration of Holika Dahan is celebrated by the burning of Holika, an asuri (demoness). Holi is a Hindu festival that commemorates the triumph of good over evil in many Hindu traditions. People donate a piece of wood or two to the Holika bonfire, which symbolizes Holika being devoured by the fire in which she attempted to kill her nephew Prahlad, a devotee of God Vishnu, and thus Holi is named. Holi is a similar festival in which people get together and often restore broken relationships.

In North India, Nepal, and parts of South India, pyres are lit the night before Holi to mark the festival. The youth amuse themselves by stealing various items and tossing them into the Holika flame.

The day is known as Holika Dehan in some parts of North India, while it is known as Sammat Jaarna in others, such as Purvanchal (eastern Uttar Pradesh and western Bihar) and the Terai districts of Nepal. Other actions are linked to Prahlad’s narrative, but the burning of Holika is the one that is most closely connected with Holi. On the eve of Holi (Holika Dahan), fire is lit to represent Holika’s burning.

The story as a whole is testament to the power of devotion (bhakta) over the evil represented by King Banjan, as Prahlad never lost his faith.

People begin gathering wood and combustible items for the bonfire in parks, community centers, near temples, and other open spaces days before the event. An effigy of Holika, who lured Prahalad into the fire, stands atop the pyre. Color pigments, food, party drinks, and celebratory seasonal dishes such as gujiya, mathri, malpuas, and other regional specialities are stocked inside homes.

The bonfire is ignited on the eve of Holi, usually at or after sundown, to symbolise Holika Dahan. The rite represents the triumph of good over evil. Around the fire, people sing and dance. People also do fire parikrama. The following day, people participate in Holi, a celebrated color celebration.

As per the Hindu scriptures, Holika Dahan should be performed during the ‘Pradosh Kaal’ (the period just after sunset) while the Purnimasi Tithi prevails. Bhadra (inauspicious time) prevails in the first half of this Tithi; therefore any propitious work should be avoided during the Bhadra.

As a result of his desire being realized, he believed he was invincible, which made him arrogant. He was so egotistical that he ordered his entire realm to worship him alone. Anyone who disobeyed his directives was punished and executed. His son Prahlad, on the other hand, disagreed with his father and refused to worship him as a god. He continued to worship and believe in Lord Vishnu. Hiranyakashipu was enraged, and he attempted to kill his son Prahlad several times, but Lord Vishnu always intervened and saved him. Finally, he sought assistance from his sister, Holika for help.

Holika had been granted a boon that made her fireproof, but she was burned to death because the boon only worked if she entered the fire alone. Prahlad, who kept chanting Lord Narayana’s name, emerged uninjured, as the Lord blessed him for his zeal. The demon ruler Hiranyakashipu was later destroyed by Lord Vishnu’s 4th Incarnation, Narasimha.

As a result, Holi gets its name from Holika, and people still reenact the incident of ‘Holika’s burning to ashes’ every year to commemorate good triumphing over evil. According to folklore, no one, no matter how powerful, can hurt a devoted believer. Those who torture a real believer in God will be reduced to ashes.

Story of Queen Soma and Kaundinya I of Funan

Story of Queen Soma and Kaundinya I is one of the best love stories in the world. Their love led them to...
Read more
History

Ajatashatru or Ajatasattu was the king of the Haryanka dynasty, his other name was Kunit. Ajatashatru ruled Magadha from 492 BC to...
Read more
History

Funan— an ancient kingdom or empire and culture of Southeast Asia

History: Biography of Chandragupta Maurya and His Maurya Empire

Kol uprising: Why did the Kol uprising take place and what were the impacts of the rebellion?

In the first half of the 19th century, especially immediately after 1820, the normal way of life and independent existence of the...
Read more
History

Harappa and Mohenjo-daro, two of the oldest civilizations in the Indian subcontinent, located in the Sindh province of Pakistan, were highly developed.
Read more
History

People's interest in learning about Jews is not new today. But how much information have people been able to know about these...
Read more